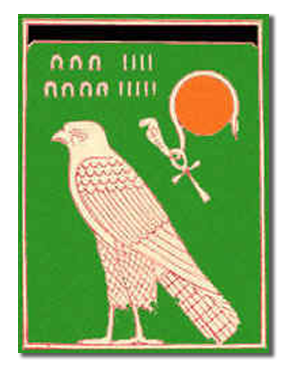 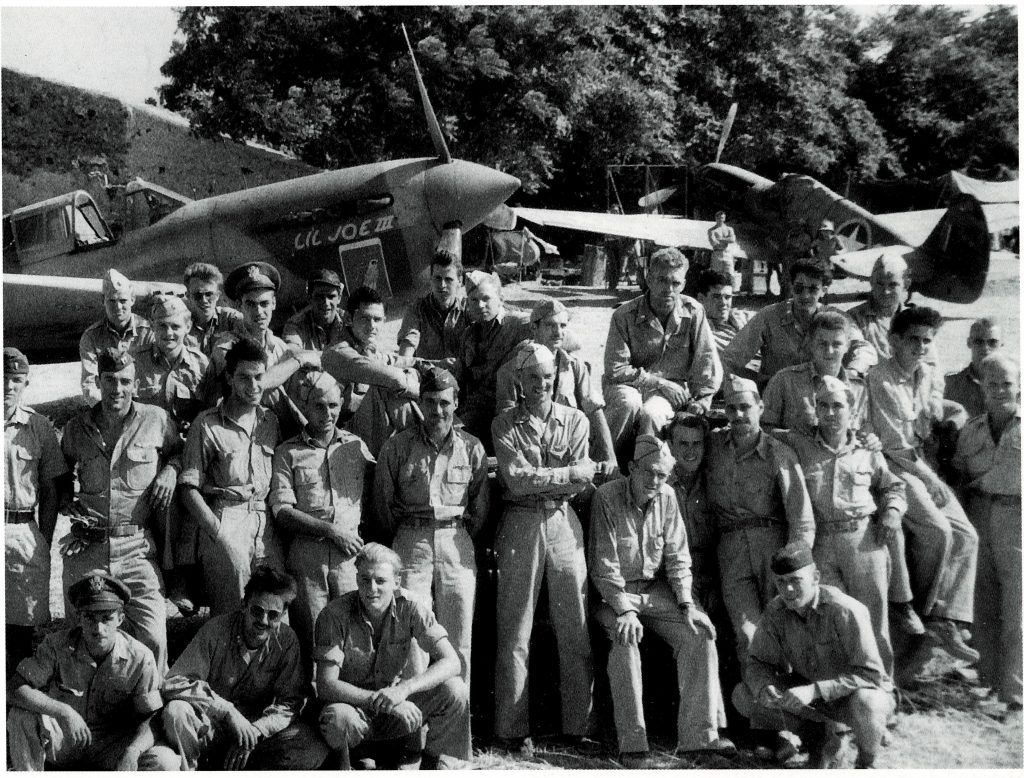 The historians of ancient Egypt recorded on their obelisks the story of Horus the hawk.  Some three thousand years ago, these scribes told of a son born to Osirus, one of the gods of the sun.  This was Horus, who was orphaned in his youth when Osirus was killed by the sun god Set.  With manhood, Horus assembled an army, killed Set, and regained the throne that was rightfully his.  The hieroglyphics on the obelisks tell how Horus, the hawk, became known to these ancients as the avenger of his father.

It is peculiarly significant that the 79th Fighter Group carried on the ancient tradition of Horus.  The design recalls Egypt, in whose burning skies they first met the enemy.  It suggests that this land of history and sand was the beginning of the British Eighth Army’s advance up the Western Desert road to Tunis, and to victory.  It points up the role played by the 79th in this victory as it supported Montgomery and his men.  Finally, it is a tribute to Colonel Peter McGoldrick, the Group commander, and the first member of the 79thFighter Group to die in combat.

Horus the hawk symbolized the determination of the 79th to avenge, like Horus, the death of its brilliant leader.  With the speed of the hawk, they dove out of the sun and struck with the swift deadliness of the cobra, and their deeds, like those of Horus, will be recorded with the immortals.

The significance of the component parts of the design is as follows:  The blue strip at the top of the insignia is the Egyptian representation of the sky, symbolic of the medium in which their planes operated.  Below this, in the upper left corner are the Egyptian numerals for “79,” the numerical designation of the Group.  The inverted U-shaped characters each represent ten: the straight lines, one; hence 79.  In the upper right corner is a device always seen in connection with any depiction of a sun god.  First the red sun, suggesting the origin of these gods, and also symbolic of the fact that fighters frequently dive on an enemy from out of the sun.  Hanging over the sun is an uraeus, or cobra, shown to represent the fact that the gods were protected, and thus symbolic of one function of fighter aircraft, namely protection.  Also symbolized are the qualities of deadliness, swiftness, and death to the enemy, which are characteristics of the cobra.  Suspended from the neck of the serpent is the Egyptian Key of Life, which was always shown with a god to symbolize immortality.  The Key of Life also may symbolize good fortune, a charm to bring good luck.  The hawk or falcon is the chief figure in the design, and is the symbolic representation of the sun god Horus.  Its form is typically Egyptian, standing dominant, erect, and fearless, the symbol of swift flight, unerring aim, strength, endurance, winged skill, and destruction of its prey.  These qualities are all symbolic of the same qualities of the fighter planes of the Group, of those who flew them, and those who kept them flying.

With the aid of Mr. Alan Rowe, conservator of the Graeco-Roman museum in Alexandria, Egypt, and Mr. Badie Effendi, the museum artist, the Falcon insignia was designed while the group was at Landing Ground 174 in the fall of 1942.

From The 79th Fighter Group Over Tunisia, Sicily and Italy in World War II by Don Woerpel.

*Information from The Falcon and The 79th Fighter Group over Tunisia, Sicily and Italy in World War II