History of the 79th Fighter Group 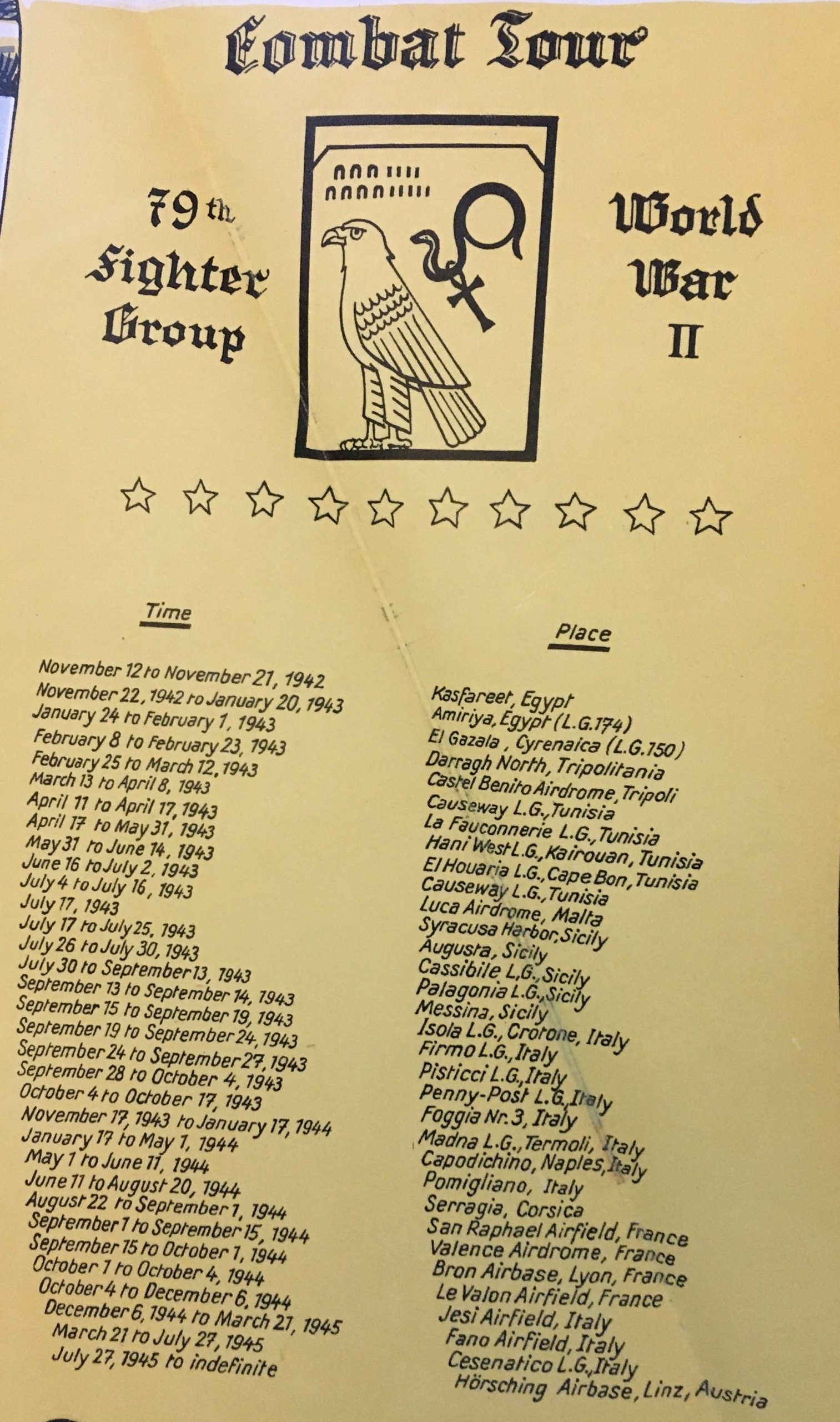 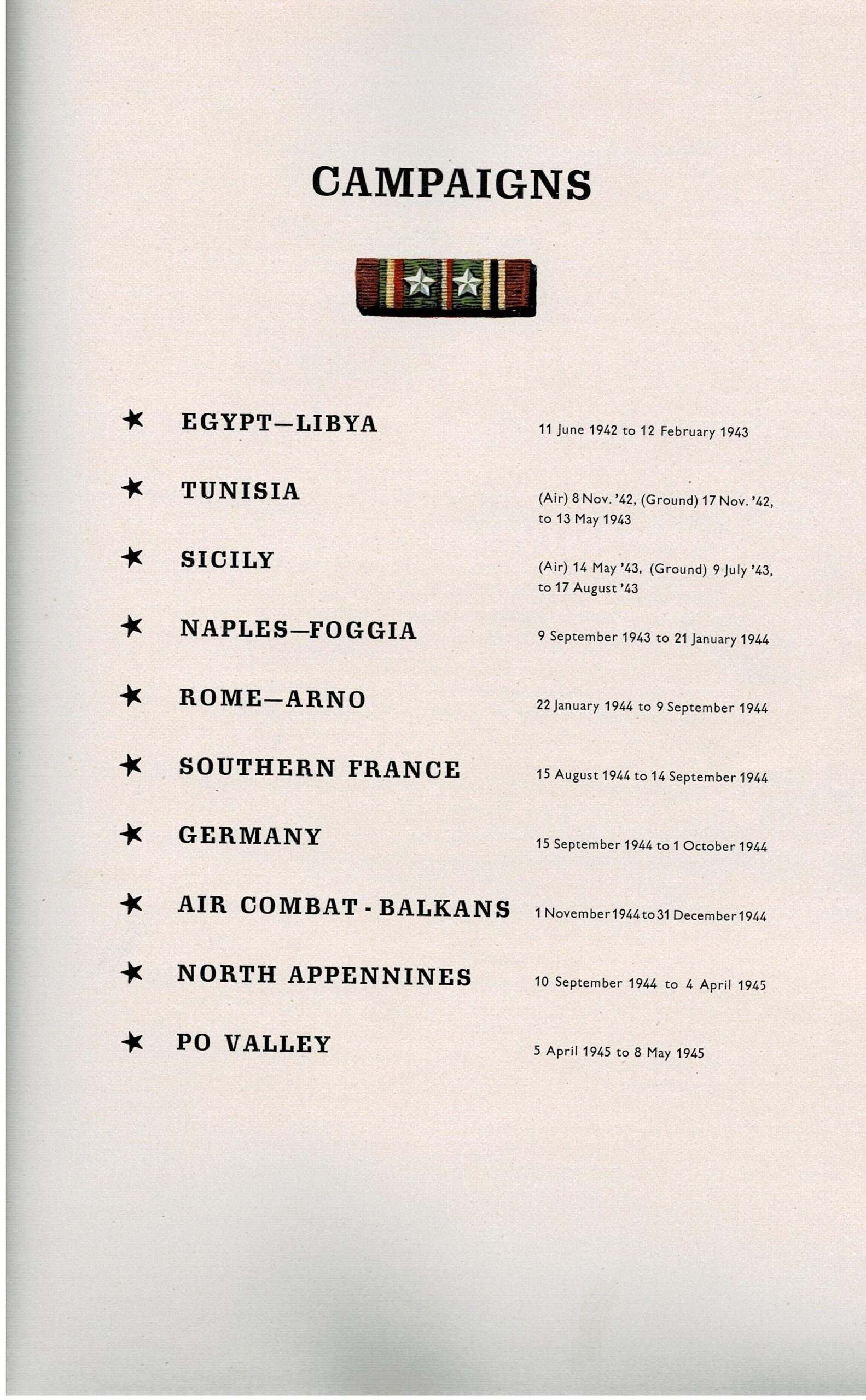 The 79th was activated on February 9, 1942, as a part of the 81st Pursuit Group, although it wasn’t until April 28, 1942, that it was officially redesignated as the 79th Fighter Group with its three squadrons: the 85th, 86th, and 87th. Lt. Col. Peter McGoldrick, a West Point graduate, was its first Commanding Officer and Major Earl E. Bates its first Operations Officer. After training at various airfields in New England, the ground echelon left Hampton Roads, Virginia, on October 7, 1942, by boat, ultimately bound for Egypt, while the air echelon flew by transports to Africa, where they obtained the Curtiss P-40 Warhawks that they would fly. Some of the pilots were initially attached to the 57th Fighter Group in order to obtain combat experience, and it was during this time that the 79th Fighter Group suffered its first casualty of war when Lt. Col. McGoldrick was killed in action on November 6, 1942. Major Bates assumed command of the group, which came together again at L.G. (Landing Ground) 174 in Egypt. As the land battle between the forces of Rommel and Montgomery pitched back and forth, the 79th FG participated in the battle of the Mareth Line and found itself moving from one airfield to another in North Africa, until the Axis forces were ultimately defeated and forced from the continent on May 13, 1943.

At that point, the 79th FG found itself battering the island of Pantelleria, lying almost halfway between the Cape Bon peninsula in North Africa and Sicily. Through the efforts of the 79th FG and other air units during Operation Corkscrew, the Italian garrison on the heavily-fortified island surrendered without a ground invasion; a first in history. Following the fall of Pantelleria, the 79th FG provided support for Operation Husky, the invasion of Sicily. Once Sicily was invaded and secured, the 79th FG moved to the island and, from there, on to mainland Italy. As in North Africa, the group found itself moving constantly from one airfield to another as the ground forces pushed northward. One of the 79th’s major contributions in Italy was while at Capodichino Airdrome near Naples, when it provided air cover for the invasion of Anzio. Here, the African American 99th Fighter Squadron was attached to the group. During March, 1944, while still at Capodichino, the 79th FG transitioned from the P-40 to the Republic P-47 Thunderbolt, which it would fly to the conclusion of the war.

After successful operations in Italy, the 79th Fighter Group moved to the island of Corsica, where its first missions to France were flown. After the invasion of southern France was completed, the group moved there. By this stage of the war, air-to-air combat was becoming rarer and the group found itself mainly supporting the ground operations. Some of its targets were in Germany itself.

In October, 1944, the 79th FG found itself stationed back in Italy, attacking targets in the northern part of the county, although the poor weather and flying conditions during this time reduced the flying opportunities.

As the final year of the war began, the group found itself still attacking targets in northern Italy, as well as adding the Balkans and Austria to the list. When the war ended in Europe in May 1945, although the men of the 79th had hopes to return to the USA, the group found itself instead in Austria as part of the occupational forces. It ultimately returned to the states in June, 1947, where it was inactivated the following month. However, in 1955, the 79th Fighter Group (Air Defense) was reactivated and assigned to the Air Defense Command at Youngstown Municipal Airport in Ohio. It was later, on an unknown date, again placed on the inactive list.

Timeline for  the 79FG