A tribute to the life of pilot Frank M. Huff by his daughter Robin Nagle and San Diego Union-Tribune Staff Writer Jack Williams 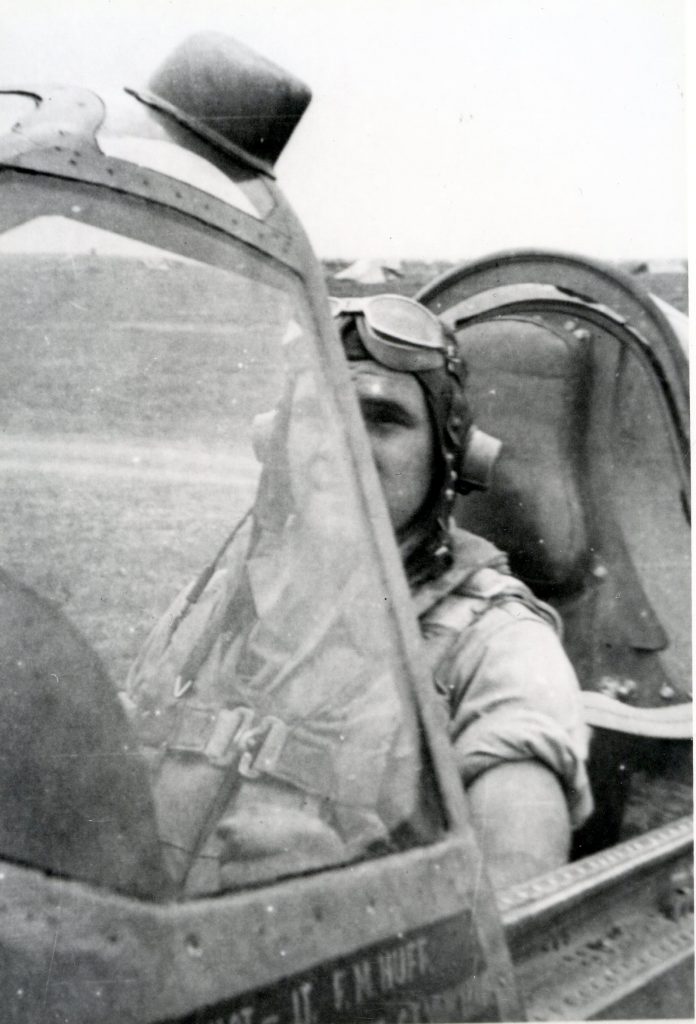 The recipient of a Distinguished Flying Cross, Mr. Huff had completed dozens of World War II assignments. Although he would be a substitute this time, strafing designated targets in his P-40, there was no more than the usual cause for concern.

“There was something about flying he just loved,” said his daughter, Robin Nagle. “He was a real fighter pilot at heart – intuitive, confident and respected for his ability.”

On the flight over Sicily, Mr. Huff was shot down, shattering his left elbow. Taken prisoner by Axis forces, he would escape on a prison train, only to be recaptured and spend nearly two years in Luftwaffe prison camps.

Mr. Huff, who left the military as a major and pursued an advertising career in San Diego that spanned 35 years, died Oct. 5 at Cloisters of the Valley. He was 86.

The cause of death was pneumonia, Nagle said.

Harry Rose-Innes, one of two South Africans who escaped from the prison train with Mr. Huff, wrote “The Po Valley Break: The True Story of Three POWs and Their Bid for Freedom in Mussolini’s Italy.” Published in 1976, it recounted the efforts of Mr. Huff and the South Africans to evade capture for 30 days as they made their way north.

Many Italian families sympathetic to the Allies hid and protected the men. Eventually they were betrayed by German sympathizers and Mr. Huff was sent to a prison camp for Allied airmen in northeastern Germany.

After being liberated near the end of the war, Mr. Huff helped release political war prisoners from a camp nearby. Then he spent three weeks regaining his strength and relaxing in Paris.

He never flew another combat mission.

Joining the Army Air Forces, he underwent flight training in Florida and received his wings in 1942.

Mr. Huff began flying combat missions in the North African campaign and was promoted to captain. Later, he was awarded the Distinguished Flying Cross for his role in sinking an enemy ship in the Mediterranean, Nagle said.

After the mission on which he was shot down, he was treated for his broken elbow in a field hospital. He had a plaster cast on his arm when he escaped from a POW train, hopping out a window in the middle of the night.

In “The Po Valley Break,” Innes-Ross described Mr. Huff as “uncomplaining, never ruffled and doggedly determined.” He noted that the American flier was “an eagle with his wings clipped” and “out of his natural element – the sky.”

After the war, Mr. Huff was stationed at Napier Air Force Base in Dothan, Ala., where in October 1945 he married Marjorie Kimpton Barker.

Instead of accepting an assignment to Japan, which would have separated him from his wife, he decided to end his active duty and pursue a civilian career. His interest in art and the encouragement of his wife led him to the Rhode Island School of Design, which she had attended.

After graduating, he sought a drier climate for his wife’s fragile health. The couple moved to San Diego with their young daughter in 1950.

After his partner’s death in 1967, Mr. Huff took over the agency and expanded into Honolulu. He added clients in Oregon to a strong base in San Diego that included Home Federal Savings and Rohr Aircraft.

For many years, he volunteered at what now is Rady Children’s Hospital, teaching drawing techniques to patients. He served on the boards of the San Diego Museum of Art, the Aerospace Museum, the San Diego Symphony and the San Diego Opera.

He also was active over the years in the San Diego Zoological Society, San Diego Yacht Club, Cuyamaca Club, University Club and the Advertising and Sales Club.

His wife, a longtime volunteer who in 1971 was designated a Woman of Elegance by the Salvation Army’s Door of Hope, died in April 2004. The couple were longtime residents of Point Loma.

Survivors include daughter, Robin Nagle of London; a granddaughter and a great-grandson.