A letter from pilot Melvin Keith Davis, MIA on 21 March 1943, and newspaper articles about him from the collection of his sister, Evelyn Davis, and provided by his nieces and nephew. 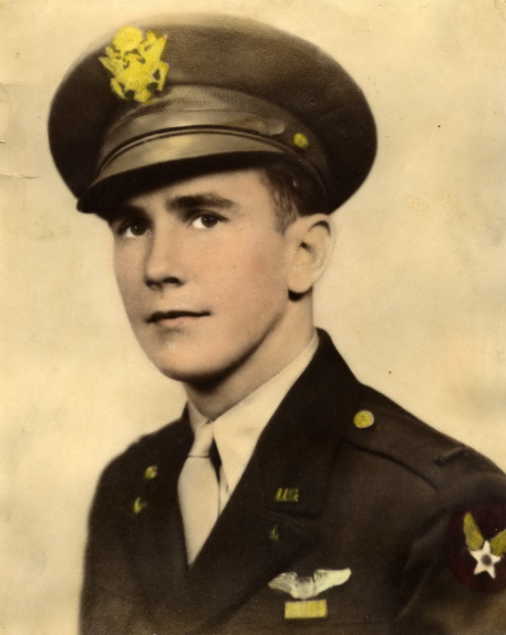 Melvin Keith Davis was born on 31 December 1920 in Poy Sippi, WI.  He attended Roosevelt Elementary School in Neenah, WI, and graduated from Oshkosh High School in 1938.  He then attended the Oshkosh State Teachers’ College (now the University of Wisconsin-Oshkosh) where he took the Civilian Pilot Training Program.  He played the clarinet in both his high school and college bands and was also a member of the DeMolay.

In October, 1940, Melvin Keith Davis enlisted in the Army Air Corp as an aviation cadet and began his training at Victoria Field, TX, and then transferred to Randolph Field, TX.

After receiving his wings and becoming a pilot, Lt. Davis was assigned to the 85th Fighter Squadron of the 79th Fighter Group.  On 26 August 1942, while the 85th FS was stationed at Bedford, MA, he married Miriam Lorraine Starkey.  Barely a month later the 85th FS, as well as the rest of the 79th FG, was deployed overseas to North Africa.

On 21 March 1943, his 15th mission, Lt. Davis was flying a P-40, possibly coded X25, along with other 79th FG pilots providing cover for B-25 Mitchell bombers over Gabes, Tunisia, when the flight was “bounced” by German Bf-109 and Italian MC-202 fighters.  Lt. Davis failed to return from the mission, with no one observing what happened to him.  Although initially being listed as MIA, in June, 1944, he was officially classified as being killed, posthumously receiving the Purple Heart.

A letter sent to the family and signed by General “Hap” Arnold contained the following passage: “He was a reliable, energetic pilot who cheerfully accepted difficult assignments & accomplished them in a manner that earned the confidence of his superiors & admiration of his associates.”