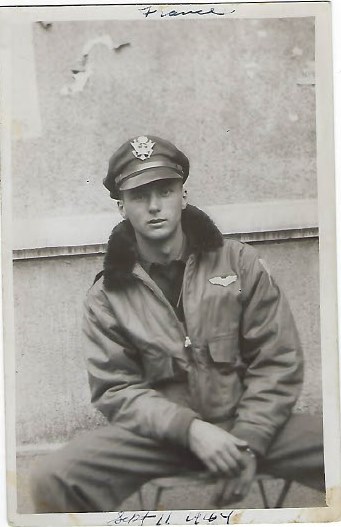 When Raffaelle “Ralph” Pasquale left his hometown of Haverhill, Massachusetts in 1943 for Waycross, GA, to begin flight training, he was not yet 20 years old. His youth didn’t prevent him from graduating from flight school, and in late July 1944 he was overseas. He then joined the 87th Fighter Squadron, likely one of 16 replacement pilots it received in early August. According to his son Andrew, Ralph named his P-47 STERILE ERROL as an irreverent reference to actor Errol Flynn.

Andrew also said that Ralph could have completed his tour after 70 missions, but hoped to fly 87 (in honor of his squadron) but at least made it to 79 (in honor of the group). At the time his tour was completed, he was a captain and had been awarded the Distinguished Flying Cross, the Soldier’s Medal, and the Air Medal with three Oak Leaf Clusters.

When Ralph returned from the war he wanted to continue to fly. However, his mother said no, you’re going to back to school to get your degree and you’re going to work for your father. “And that was that,” Andrew added.

Apparently even decorated fighter pilots listen to their mothers.