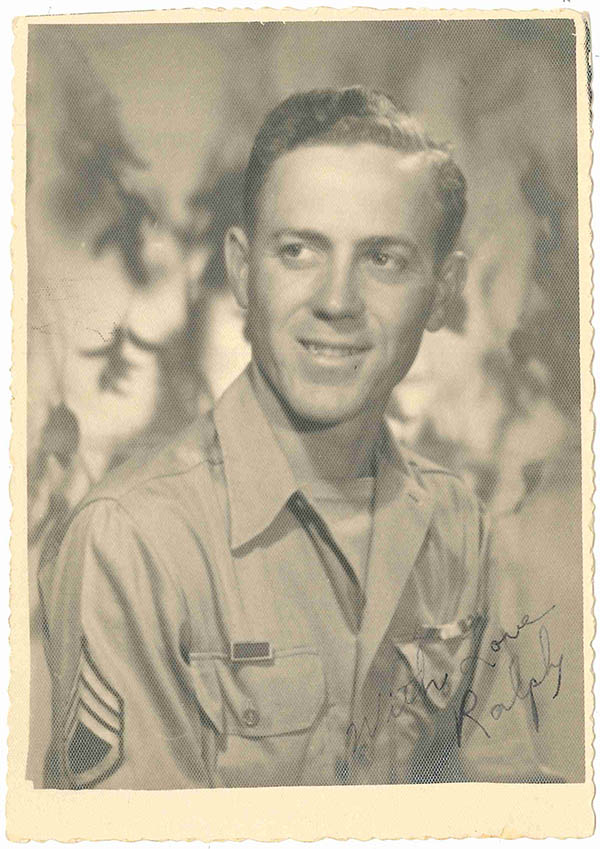 My dad, Ralph Christopher Cox, was very proud of his military service. Eager to “do his part” and contribute to the War effort, he enlisted in the Army Air Corps on October 2, 1941 at the age of 21, and entered active duty at Camp Shelby, MS. He had graduated in the Class of 1938 from Warren Easton High School in New Orleans, and spent another 2 years at Maben Business School, which is where he met and fell in love with the wonderful young woman who would later become his bride, Marie Antoinette (Nettie) Cresson.

Ralph was promoted to Staff Sergeant a month after his enlistment and, after completing 16 weeks of Service School at Chanute Field, IL, was certified as an Airplane Mechanic in May just about a year later, on October 7, 1942, he shipped out to North Africa aboard the”Mauritania.” After a month-long voyage, he arrived at his destination, and would spend the next 3 years as an Airplane Crew Chief “fighting Rommel in the desert of North Africa” with the 79th Fighter Group, 85th Fighter Squadron (The Flying Skull). At the conclusion of the War, he shipped home in August 1945, and was Honorably Discharged on the 29th of that month. I remember him having a patch with “DAF” embroidered on it in gold thread, which he told me stood for “Desert Air Force.”

Only a couple of months after he retumed home, Ralph man·ied the girl he had left behind. He and Nettie were married at St. Louis Cathedral in New Orleans on November 17, 1945, and began a life of total devotion to each other that lasted until he died 57 years later. I, named Ralph, Jr., was born 9 months and 22 days later, the first of their four children. I was followed by two sisters, Patricia and Peggy, and a brother, Kenneth.

Dad never talked much about his experiences during the war, and only occasionally related humorous tales, such as about how the Nomads would appear from the sand dunes out of nowhere; or how in the towns, one of them would spray a stinky liquid on you as you passed, and another at the end of the block would hold his nose as you passed and tell you how bad you smelled and try to sell you a perfume to hide the stench. Even though he saw no actual combat, I believe his Wartime experience affected him deeply. He avoided talking about what he witnessed, and became very emotional whenever confronted with the realities of the War. After the D-Day (now World War II) Museum opened in New Orleans, we commemorated his service with a memorial brick. When we brought him to view it, he could not even sit through the introductory movie without breaking down.

After he was discharged from the Service, he began working for Marchant Calculators as a calculator repairman. Many businesses at the time used either Marchant or Fridan mechanical calculators, with their full keyboards and carriages with rows of dials. They were powered by electric motors but, because their processes were essentially mechanical, parts wore out and they often needed maintenance and repair. One of Ralph’s big accounts was a paper mill in town of Bogalusa, about 60 miles northeast of New Orleans. I remember that he used to leave a dozen or so of the operational calculators on site, so the office staff could just swap out any that broke.

He would visit the plant once a month or so to repair all those that needed attention. Being very industrious, shortly after the introduction of the newly invented television, Ralph took classes to learn how to repair them and started repairing TVs “on the side”. He was always handy and could repair almost anything. He could handle anything mechanical, and was well versed in all the trades – carpentry, plumbing, electrical, etc. I remember as a youngster thlnking about all the things my dad could do, and proudly telling my mom: “My daddy is an every kind of man!”

In August 1959, after taking classes with IBM, he began a 26 year career as a data processor and then computer operator with Ford Motor Company. He worked at the Ford Parts Depot in Arabi, LA until 1970 when the depot was closed, at which time, he accepted a transfer to Houston, TX.

Ralph was a lifelong avid fisherman. His absolute favorite pastime was fishing, crabbing, or craw fishing – If it lived in water, he was after it! (He cherished a plaque his children presented to him acclaiming him as the “World’s Best Crab Boiler”!) He always maintained a “camp” either on the Mississippi Gulf Coast or on Dickenson Bay south of Houston. In 1992, Ralph and Nettie relocated to Bay St. Louis, MS where he “lived his dream” until his health began to fail.

He eventually died of Congestive Heart Failure on October 20, 2002. His final wish was to have his ashes spread upon the waters of his beloved Gulf Coast. He was survived by Nettie, his beloved wife of 57 years, their four children, and five grandchildren.