The life of pilot Stewart H. Spencer, by his son Paul Spencer 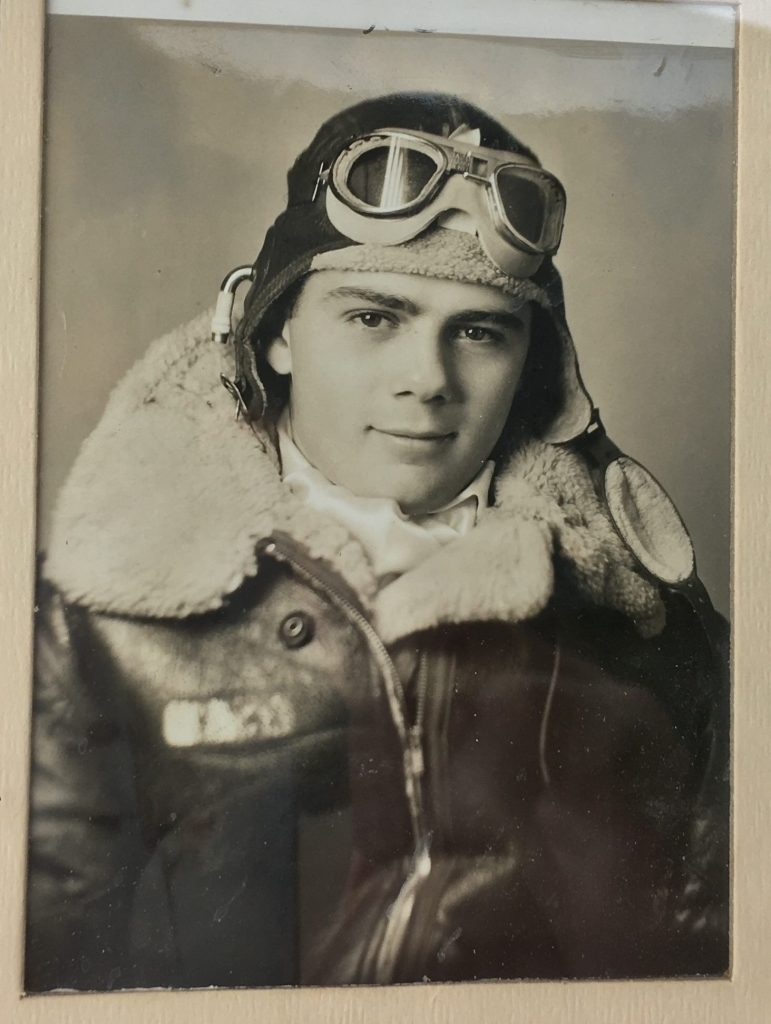 Stewart Howard Spencer was born May 28, 1924 in San Francisco, California

While being raised in San Francisco he was also able to spend fun filled summers at his parent’s ranch in the Sacramento valley. His step father was an engineer who accepted an assignment in Honolulu, Hi in the summer of 1941.  Stewart was a high school senior when on December 7, 1941 he observed the bombing of Pearl Harbor from his beach perch at Waikiki.  As with many of the Greatest Generation, he enlisted in the Army Air Force with dreams of becoming a pilot after receiving his diploma in June 1942 from Roosevelt High School, Honolulu.  Completing his training in Vernon, Texas along with Enid, Oklahoma he received his Wings in 1944 at Foster Field Texas., Now a newly minted P-47 fighter pilot.  His first deployment was to Cesenatico, Italy (1945) and later Linz, Austria (1945-46) with the 85th Fighter Squadron of the 79th Fighter Group.  After the war ended, his wife Olga and daughter Sandy were some of the first (dependent) family members allowed to reunite with their husbands in postwar Europe. Sandy was 5 months old.  The reduction in forces allowed Stewart and his family to return to San Francisco in 1946.  The San Francisco Police Department was looking for recruits and preferred military personnel.  Stewart was hired immediately and served on the department until 1951.  Changes came again with the Korean War and Stewart was in the reserves.  He decided to return to active duty.  He missed flying and had the opportunity to return his career to the sky.

He was transferred to Thule Air Force Base (AFB), Greenland in 1952 while Olga and their two children, Sandy and Vic, stayed in California.  He was the Provost Marshal for the base.  It was built during the Cold War as a strategic defense location (DEW Line) against Russian attack.  During this assignment, he reevaluated his career path and decided to become a helicopter pilot.  After his training was completed, he was assigned to multiple bases and assignments.  While part of the 23rd Helicopter Squadron, he flew H-21s.  In 1956, he became the commander of the unit to be assigned to Tripoli, Libya.  This new assignment at Wheelus AFB would not be without adventure such as sand storms, helicopter crashes, and the birth of their third child Paul.

Returning stateside in 1960, Stewart and the family were stationed at Tyndall AFB in Panama City, Florida.  During this time, he transitioned into flying T-33 jet aircraft, attended radar controller’s school, and became an instructor in radar intercepts.  Additional assignments and bases followed his career including: site commander Kotzebue, Alaska; air force helicopter school, Stead AFB Nevada; and Sheppard AFB in Texas.  In October 1966, he was assigned to the 20th Helicopter Squadron “Pony Express” in Vietnam/Thailand as aircraft commander.  He piloted CH-3C and HH-3E Jolly Green Giant helicopters on various support and clandestine missions from his permanent station at Udorn AFB, Thailand.  Upon completion of his final overseas assignment, Stewart elected to separate from the US Air Force retiring as a Lieutenant Colonel in 1967.  He then continued his civilian aviation career working with Carson Helicopters in “heavy lift assignments” and as a civilian contract flight instructor teaching basic instrument flight instruction in H-13 helicopters for Ross Aviation in Enterprise, Alabama.  Stewart, Olga and Paul moved to Woodland, Ca where he purchased a 22-acre walnut orchard enjoying a well-deserved retirement. Stewart’s wife passed in 1987 but he found love once more in 1990 marrying Julia. They lived their twilight years in Santa Rosa, Ca. Stewart passed away April 11th 2016 just shy of his 92nd birthday.